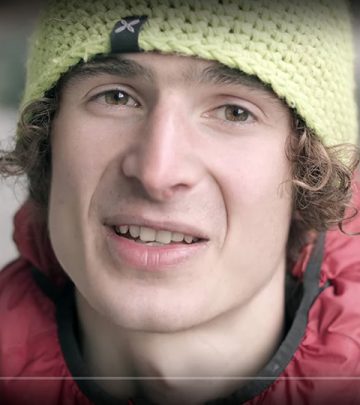 Last month I published a performance analysis of Margo Hayes’ incredible ascent of Biographie (5.15a/9a+). Now with the release of the internet movie, Silence, I have similarly analyzed Adam Ondra’s  barrier-breaking ascent of the world’s first 5.15d/9c!

Whether you’re a weekend warrior or aspiring pro climber, there’s a lot you can learn from Adam and Margo—powerful performance “clues” and vital bioenergetic “keys” to their successful ascents. Pushing personal boundaries, no matter if it’s 5.13a/7c+ or 5.15d/9c, demands near perfection of mind and movement, as well as highly nuanced long-term training and total commitment (and sacrifice).

In terms of bioenergetics, a successful ascent requires masterful exploitation of hard-earned (in the gym) anaerobic and aerobic power production—like a Grand Prix driver, knowing exactly when to step on the gas and when to hit the breaks or coast. When climbing (or driving) at the limits, there’s a fine line between going too fast and “crashing”…and expressing the maximal effective power and speed to navigate a crux sequence (or challenging S-curve). To the observer, a successful outcome may look almost “easy” despite the bewildering difficulty and immense power output. To a coach (like me), however, these ascents exemplify the majestic beauty of climbing and human potential realized…where science, art, and personal will power coalesce to break new barriers and make the once impossible possible.

This short film Silence, by Bernardo Giménez, tells the story of Adam’s multi-year journey that culminated with his successful ascent on September 3, 2017. I encourage you to watch the entire movie, but I have the video below set to begin at the 11:00 mark…which is the beginning of the crux climbing. My analysis (below) will cover 4 minutes and 49 seconds of actual film time, but about 9 minutes of actual on-the-route time (since 4+ minutes of resting was edited out around the 12:00 mark).

The first 65 feet of climbing (briefly shown ~3:40) checks in around 5.13d/14a and brings Adam to a knee-bar rest at the start of the business. From here, it’s 80 feet of severely overhanging and bouldery climbing comprised of four chunks as defined by four rest stops and the anchors. Adam has graded these four sections as V15, V13, V10, and V5.

The send footage begins at the 11:00 mark of the film with Adam resting (knee bar) before blasting into the route’s hardest section (chunk #1).

Commentary: Adam climbs this section in 50 seconds—which is extremely fast for such a technical, awkward, and unlikely sequence—with not a hint of pause or doubt. There’s no searching for foot holds or “just the right balance point”, as Adam has the sequence programmed to perfection…like an Olympic gymnast or figure skater executing a gold medal performance. The close-up camera work on the inverted moves (11:36) reveals how Adam alternates between brief moments of breath-holding (Valsalva maneuver to maximize core stiffness and stability)  and forceful exhalations, which compel inhalations that maintain arterial oxygen saturation (important to support aerobic power production). I don’t know if Adam was ever coached to do this or if it’s just intuitive for him, but his MO (modus operandi) of screaming through hard sequences is an excellent strategy to drive deep breathing and maintain aerobic power, by avoiding the common problem of “legacy breath holding” (as I call it) in which you continue to breath-hold beyond the instant of doing a single hard move (this results in hypoxia and a greater rate of fatigue).

As important as Adam’s fast, precise climbing is his ability to find rest positions that will allow for significant recovery. Arriving at a critical knee bar rest (12:02), after 50 seconds of near maximal power output, Adam’s undoubtedly got high blood lactate and low intracellular pH that have severely disrupted homeostasis—to successfully climb the upcoming V13 sequence will require massive recovery taking minutes, not seconds, to achieve. Interestingly, Adam has commented that when first working the route he could only stay at this rest a short time due to leg pain/cramping. With specific training (of his left leg) and a more nuanced approach to this rest position he was able to stay here more than 4 minutes (mostly edited out the movie) on the redpoint! These 4 minutes of slow, deep breathing and arm shaking allowed Adam’s, perhaps peerless, climbing-specific aerobic power to direct exceptional recovery (via lactate shuttle, H+ buffering, and creatine phosphate resynthesis)…enough to successfully climb the powerful V13 sequence beginning at 12:14.

Commentary: Adam’s 20 hand and foot moves in 25 seconds makes of a climbing rate of one move every 1.25 second—that’s likely 3 to 5 times faster than the average redpoint climber! In my 40 years as a climber, I’ve never witnessed (or viewed on video) a climber moving so fast up a difficult climb—compare video of this section to any non-Ondra video on YouTube and the other video will look like it’s in slow motion. Of course, speed is a necessity for Adam here, since his anaerobic reserve (coming out of the rest) was likely only enough for 30 seconds or less of high-power-output climbing. (Note: A video of Adam on this section in Spring 2017 shows him moving slightly slower…taking ~32 seconds to climb this section—cutting out 6 or 7 seconds of time under tension from these hard moves may equate to a ~20% savings of ATP/CP…or an equivalent savings of H+ and lactate production, however you prefer to look at it.) The bottom line: these 25 seconds of climbing depict absolute climbing perfection and laser-like focus. Hail Adam!

Having completed V15 and V13, you’d think the send was in the bag. NOT! Compared to the two previous rests (which Adam could linger for a few minutes), he spends a mere 37 seconds (12:39 – 13:16) shaking out at this “poor rest” before launching into the V10 section.

Commentary: In climbing this super-steep section Adam makes only 12 hand moves, but at least 18 foot moves in order to maintain body tension and the necessary posture to make the sequence work (there is one brief unintentional “loss” of foot contact at 13:36—perhaps proof that Adam is indeed human!). Once again, Adam screams his way through the sequence—as I mentioned earlier, this yelling is not superfluous, but an absolute necessity to pulse core tension, drive forceful breathing, and maximize aerobic power. Something new in this chunk is Adam’s brief mid-sequence “shake out” (13:50 and 14:09) to provide the arm muscles an extra sip of oxygen.

Commentary: Twelve seconds to glory! Sure, Adam can probably do V5 in his sleep, yet notice that he’s not celebrating, nor rushing through the final rest. In taking a relatively long (85 second) rest, with lots of deep, forceful breathing (listen!), he’s guaranteed to resynthesize enough creatine phosphate to be able to send the final three-move chunk. Booyah!

Keys to the Send:

Bioenergetics & the Need for Speed:

Climbing fast, without a drop-off in technical precision, is one of the hallmarks of elite climbers—understanding why requires a bit of exercise physiology. Performing moves on small holds up steep walls demands high power output that’s significantly fueled by the anaerobic production of ATP (the fuel for muscle contraction at the cellular level). The anaerobic lactic energy system can support a high ATP flux in the working muscles for approximately 60 seconds of sustained, high-power pulling and crimping, however there is a rapid decline in anaerobic ATP production between about 30 and 90 seconds, resulting in a hyperbolic decrease in power output as ATP production increasingly relies on the slower aerobic energy system (via oxidative phosphorylation).

During periods of sustained near-maximal climbing, then, it’s essential to climb from a rest position through a near-limit crux in less than about 60 seconds, as sustained climbing much longer is possible only at a lower power output level (easier moves on larger holds). Of course, energy systems development (the relative contribution of each to total power) varies from climber to climber based on their training, genetics, and dietary nutrition, but on average hard, sustained climbing (no stop rests) is limited to around 60 seconds.

While digging much deeper into bioenergetics is beyond the scope of this article, I will close out this section with the critical distinction that it’s the aerobic energy system that drives recovery during rests and it plays a crucial supporting role for anaerobic energy production as long as you can keep blood flowing through the working muscles (i.e. not gripping any given small hold for more than a second or two). Therefore, climbing such a steep, strenuous, and unrelenting route as Silence undoubtedly demands a high climbing-specific VO2max (maximum oxygen utilization). Climbing research has documented VO2peak of between 40 – 50 ml/kg/min on steep, difficult climbing in a lab setting…and so I speculate that Adam consumed oxygen beyond these levels, perhaps as high as 55 or 60 ml/kg/min? (Listen to Eric speculate further on this topic in his Podcast #20.) The bottom line: Hard steep climbing demands that you possess super-strong anaerobic and aerobic energy systems.

P.S. You can learn more about bioenergetics and energy systems training in the 3rd edition of Training for Climbing and by listening to the series of five in-depth podcasts on the art of the science of elite training.